I’ve told you all before that I love a good lemony dessert, the bright citrus flavors really wake-up my tastebuds. And lemon desserts, like this low carb lemon lush, are the perfect refreshing finish to warm weather days.

Lemon lush is a layered dessert, a citrus version if you will, of Chocolate Lasagna. Traditionally, its made with a buttery flour and pecan shortbread crust. A sweet layer of cream cheese lays in between the shortbread and tangy lemon pudding. A layer of whipped topping sits on top of the lemon pudding layer, completing the dessert.

Instead of using sugar-laden processed ingredients, my low carb version uses predominately whole foods. The low carb shortbread crust is prepared from almond flour and pecans instead of flour and butter. I replace the packaged lemon pudding with a deliciously tangy homemade lemon curd. And who wants Cool Whip when homemade whipped cream is so easy to make?

NOTE: Preparing the lemon lush isn’t difficult but it does take a bit of time. Fortunately, it’s easy to prepare some steps ahead of time. I often prepare the lemon curd and the shortbread crust in advance. Then, assembly is very quick.

So, I’m going to be honest. Making a lemon lush is easy, but it does take time. Most of the time is waiting for things to cool/chill. It can be made in one day, but you should start early. I prefer doing the lemon curd and crust the night before.

The first step to making this lemon dessert is preparing my favorite low carb lemon curd. It’s the same recipe I use in my low carb lemon curd pie and between cake layers. It’s refreshing and so delicious that I jump at the chance to use it in different recipes.

A lemon curd is an egg based custard. My recipe is sweetened with erythritol and stevia instead of sugar. Making the curd is as easy as stirring ingredients together over low heat until thickened. It’s best to make the recipe ahead of time to give the lemon curd a chance to set and cool completely – at least 4 hours.

A pecan shortbread crust is traditional. To assemble the crust, chop the pecans very finely. Then combine the finely chopped pecans with the protein powder, almond flour, and sweetener in a small bowl. Next, pour melted butter over the ingredients and mix with a fork to form a moist crumbly mixture. Pour the crust mixture into a 9×13 pyrex dish, pressing firmly. Then bake and let it cool – about 30 minutes.

All that’s left is assembling the dessert:

With all the parts ready to go, this dreamy citrus treat comes together in a few minutes. The shortbread crust makes the bottom layer of the lush and is ready to go in the baking dish. Spread the cream cheese layer evenly on top of the shortbread crust, making sure to cover the whole crust layer. Next, whisk the lemon curd layer to loosen it up a bit, then spoon it over the cream cheese layer. Lastly, top the lemon lush with a layer of light fluffy whipped cream.

You can serve the dessert right away, but it’s best when allowed to chill for several hours. I always suggest making in the morning to serve at night or prepare the day before. It holds beautifully in the refrigerator. For smaller occasions, halve the recipe and make in an 8×8 inch baking dish. Any leftover dessert freezes well. 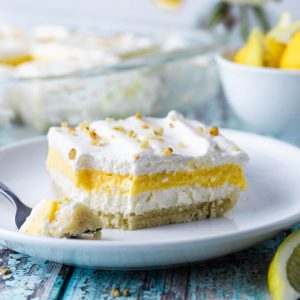 Lemon Curd (time: 20 minutes) (must be chilled at least 4 hours)