“I don’t like coconut, Honey, but I’ll have another piece” — My Husband.

I’m really excited about this dessert, not only because it tastes reeeaaaaaly good but because it is made from scratch with wholesome ingredients. It’s a treat you can feel good about making for your family. And it’s really hard to believe that something this incredible is gluten-free AND low carb! I bet your friends won’t be able to tell.

This dessert was originally slated to be made with peanut butter but I to improvise. I’m glad I did! Two weeks ago, I brought to you a luscious Low Carb Chocolate Lasagna layered dessert that got raves on social media. This is a simple variation on that popular dessert that I like just as much!

So, what are the specific layers?

This dessert freezes very nicely, but add the coconut topping after thawing. The recipe can also be cut in half.

If you are a coconut lover I can’t wait for you to try this. Please leave me a comment and let me know what you think! 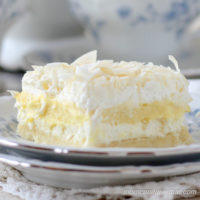