I love southwestern flavors with bold spice blends and zesty, smoky tastes. I’ve never met a taco filling I didn’t like. I’m also a big fan of stuffed peppers and like to stuff them with fun things like these Sloppy Joe stuffed peppers or Philly Cheesesteak stuffed peppers.

What is a Poblano Pepper?

A poblano pepper is a fairly mild chili pepper which originates from Pueblo, Mexico. They are traditionally prepared as chile rellenos. The peppers are charred and peeled, filled with cheese, dipped in an egg batter, fried, and served with a tomato sauce. The dried form of the poblano, the Ancho chile, is used in the preparation of red sauces like mole.

Poblano peppers are fantastic for a low carb lifestyle. Not only do they have a ton of flavor, but one average sized pepper only has 6 grams of total carbohydrates. Plus they have many uses in the kitchen.

In cooking, you can use poblano peppers for:

Poblano peppers are mild, however their heat can vary. Even two poblano peppers from the same plant can have different levels of heat.

Most poblano peppers fall between 1000 – 1500 scoville units. Contrast that with the jalapeno pepper which is between 2500-5000 Scoville units. Most of the pepper’s heat is found in the white pithy veins and seeds. So if you like your food mild, remove the white veins and seeds by scraping them out with a spoon (when raw) or using  your fingers or a small pairing knife (if cooked). If you like things hot, leave them in.

What is a Substitute For the Poblano Pepper?

While you can find poblano peppers in most large grocery stores in urban areas and areas that border Mexico, if you can’t find them in your local grocer you can substitute an Anaheim pepper. They are a little smaller, lighter in color and can be milder to hotter than a poblano at 500-2500 scoville units. You can even use a green bell pepper in a pinch, but you’ll be missing that wonderful smoky flavor.

Poblano peppers have a tough outer skin. It’s traditional to char and remove this skin before using the pepper in recipes. This results in a wonderfully complex smoky flavor – it’s also ensures a tender pepper. I see lots of bloggers skip this step, but I believe it’s important. But I’m willing to meet people half way.

I always blister and peel my poblano peppers, but I do know that not everyone is into the extra step. That’s okay. I’ve made it easier for you by removing the skin from one side. The pepper still gets that smoky flavor, the top/sides are tender and the underside cooks completely on the pan.

For this recipe, I popped them under a very hot broiler for a few minutes to char. Alternately, char the peppers over a gas flame or on a hot grill. I found that blackening just one side under the broiler was enough.

Charring one side saved time and still provided the same delicious smoky flavor I love so much. Plus, the resulting peppers were tender without becoming too delicate. This helped keep the integrity of the pepper so they didn’t tear apart while the veins and seeds were removed.

After charring the peppers under the broiler, cover them loosely with a piece of foil and let them steam. Then, use a small paring knife to slit the peppers vertically 1/4-inch from the top to 1/4-inch to the bottom. Remove the lighter colored veins and seeds (2-3 veins per pepper).

While the peppers rest, saute the onion, garlic, and ground beef on the stove top. When the ground beef is cooked through, add your seasonings, tomato paste, and beef broth. I use a blend of spices to create a flavorful, bold filling. The spices include cumin, pure chile powder and a pinch of cinnamon.

After the filling cools, stir the cauliflower rice and cheese into the beef mixture. Then spoon the filling into the prepared peppers and top the peppers with more cheese. Bake the peppers for 15 minutes at 350 F.

Serve them immediately. They are deliciously perfect as is or you can top them with any number of your favorite toppings including sour cream, pumpkin seeds, fresh cilantro, or salsa.

Note: A nasty gentleman called this a BS recipe and said that my peppers weren’t blistered and peeled. The peppers shown were made just as I describe in the recipe and they are delicious. 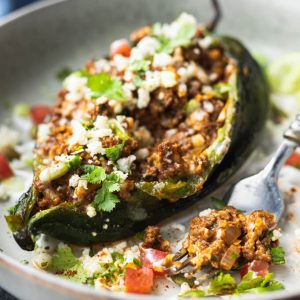