This ultra decadent low carb sugar free French buttercream  frosting is super silky and rich. Use it on your best sugar-free cakes and sugar-free cupcakes.

French buttercream is a gorgeously smooth magical confection. It’s heavenly on cakes and cupcakes. This version is sugar-free and perfect for all of your sugar-free cakes and sugar-free cupcakes. If you or family members are following a low carb or keto diet for health reasons, this is the sugar-free frosting for you.

It took a little experimentation to make this sugar free French buttercream frosting a success, but since I like baking and experimenting it was an enjoyable process!

Let’s talk about the ingredients for a minute: I used a combination of xylitol and Sukrin Icing Sugar (or Swerve Confectioners) for the sugar free sweeteners. The xylitol melts nicely and resists re-crystallizing when it cools. It was the right substitution for the melted sugar since erythritol has the tendency to seize upon being melted and cooled.

Because xylitol can sometimes cause an insulin spike in sensitive individuals, I used the smallest amount possible to get the effect I needed. To make-up the difference in sweetness (xylitol is 60% the sweetness of sugar) I augmented with the Sukrin (or Swerve), an erythritol based sweetener. (Either sweetener works well in this recipe.)

NOTE: When I tried melting the erythritol based sweetener and pouring it into the whipped egg yolks, I ended up with crunchy crystals in my sugar free frosting! French buttercream is supposed to be silky not crunchy! Using both sweeteners gave me the best performance from both and made a wonderful frosting!

French buttercream tastes like sweetened whipped butter. If it is too buttery for you, whip 1/2 cup of heavy whipping cream until very stiff. Fold it into the frosting 1/3 at a time. You will notice the frosting almost making a little water. That’s because the whipped cream is cold (and it’s more liquid than fat). Let it warm up before trying to use it.

This sugar free frosting recipe was adapted from this French buttercream recipe on Serious Eats.

WARNING FOR DOG OWNERS! Do not let your dog eat anything that contains xylitol as an ingredient. It is fatal to dogs. 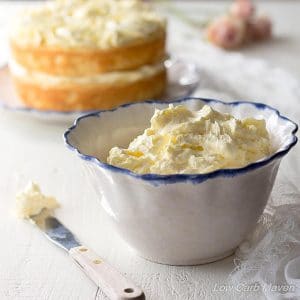