This light as a feather sugar-free buttercream frosting will become a favorite for birthdays and other low carb celebrations.

I love cakes and cupcakes. There is nothing more beautiful than a layer cake decked-out in fluffy white frosting or a cupcake with that beautiful, mounded swirl, of sweet-velvety-goodness on top. We’ve all heard the phrase “frosting makes the cake”, and it is oh-so-true.

Over the years, I have created many low-carb frostings. The best low carb version I came up with was about half butter and half Greek yogurt. It was very fiddly. If the ingredients weren’t the exact temperature, it would break, leaving a watery mess that had to be gently heated and re-mixed. Xanthan gum helped a bit to keep the mixture emulsified, but sometimes the low carb sweeteners wouldn’t completely dissolve and the frosting would be a little grainy. It tasted great though.

Other sugar-free frostings I tried, were coconut cream based or coconut oil based and just never turned out well because they melted very quickly. Non-hydrogenated palm oil shortening was a good choice, but again, I ran into the problem of the low-carb sweeteners not dissolving completely, leaving a sweet tasting but gritty product. Depressing.

I am happy to announce that I have finally had total success!

This is the most beautiful low carb, sugar-free, dairy-free buttercream frosting I have ever made. With all of the ingredient constraints I face in daily cooking, due to food allergies and dietary concerns, I thought a fantastic frosting would never be possible.

This frosting is silky, fluffy, lightly sweet, and substantial enough for the middle layer of a layer cake. And although the completely dairy free version doesn’t hold up to heat as well as a real-butter frosting, it is considerably more tolerant than most Paleo or Vegan concoctions made from whipped coconut milk or coconut oil.

The process begins with a sturdy vanilla custard (pudding) that is slowly whipped with air. I used xylitol for the sweetener here because it resists re-crystallization upon cooling. (note: if you have dogs make sure they do not eat any product made with xylitol! Use an erythritol based 1:1 sugar replacement like Sukrin :1, Swerve Granulated, Lakanto or Besti.)

Then, butter (I use a combination of shortening and butter) is slowly incorporated and the amount of frosting balloons to a voluminous to 5 cups! That’s enough to frost a 3 tiered layer cake or to frost 72 cupcakes! Since the process is a little time consuming, I make double the batch and keep the extra in the freezer because it freezes beautifully. 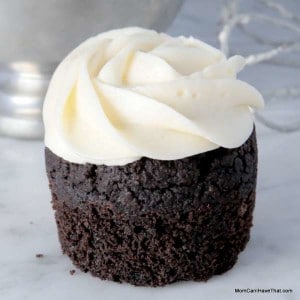 Makes 5 cups of frosting. NUTRITION PROVIDED IS PER 1/4 CUP SERVING and is 1.4 CARBS.

How much frosting to use: