This one-pot Mediterranean Chicken is a healthy meal made with chicken, tomatoes, and artichoke hearts. It’s flavorful and ready in 30 minutes! Perfect for any healthful low carb or ketogenic diet!

Hi! Happy Thursday. The kids and I are back from having a great visit with my folks in Texas. We were lucky to have an easy flight there and back. And, I have to brag and say that my kids are such great travelers. I’m really proud of them.

You’re here for a recipe, right? I’ll get to it pronto.

Then, I began working and was often out of the house 12 hours a day. I became the one-dish or skillet-queen! Fast and easy dinners became the name of the game. I always started with a protein and added pantry staples to the pot as it was cooking. Adding beans, pasta or rice, made it a complete meal — but not low carb.

When I decided to try Atkins several years ago, I began a love affair with my grill. Since, it’s grilling weather in California almost year round, it’s my preferred way to cook chicken, sausage, pork tenderloin, burgers, and steak. It’s so easy to grill up your favorite protein to add to salads or quick weeknight dinners during the week.

Now a days, I am re-discovering my love for my skillet. I used to make this recipe in my pre- ketogenic diet days. It’s not only low in carbs, but diary-free, gluten-free, Paleo and suitable for Whole 30. In other words, it’s just about the perfect meal! Preparing it in a cast iron skillet makes it easy with out heating up the house. Add as much olive oil as you like – it just adds more flavor, but I have found that 4 tablespoons for 6 people is about perfect.

Browning the chicken breasts in the pan helps build the flavor of the dish, so don’t skip. I had three giant chicken breasts that I halved, making six portions. Canned peeled plum tomatoes and canned artichoke hearts keep it fast, easy and full of healthy vegetables. It’s an easy pantry meal that you will want to make again and again. It can easily be customized by adding Italian sausage, olives, summer vegetables, canned beans (for those not low carb I suggest cannellini or garbanzo), red or white wine, a little vinegar or Worcestershire sauce, Parmesan cheese or pasta (again, for those not on a low carb diet).

I served this one-pot Mediterranean chicken dish with a side of sautéed zoodles (zucchini noodles) tossed with Parmesan cheese. It was a great combination. I felt proud to serve my family something that not only tasted delicious, but was healthy and full of nutrition. That’s what it comes down to at meal times for us: “Is it healthy?” Check! And, “Is it tasty?” Check!

Try these other tasty and healthful recipes: 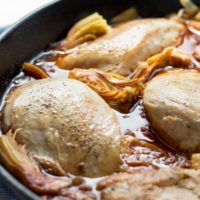