These homemade Indian Tikka Chicken Wings are marinated in coconut milk and Indian spices, cooked on the grill and then served with a bright citrus-cilantro sauce.

[This tasty recipe has been updated with new photos. Enjoy!]

This Chicken Tikka Marinade is so easy and so delicious! You’ll have great flavor with minimal effort.

If you’ve been to the site before, then you know I like food with flavor. I especially like ethnic flavors like Indian curries, Chinese food with lots of ginger and garlic, Thai dishes or Italian American classics.

One of my favorite cookbooks is one my mother gifted me years ago. It’s an Indian cookbook and out of print, now. If you turn to any page you’re bound to encounter my handwritten notes in the margins. I’ve spent many years tweaking the recipes to suit my low carb lifestyle and my tastes. This Indian tikka chicken wings recipe is a product of my tinkering and a reflection of a time my family eschewed dairy.

What I like about this easy chicken wing recipe is that it’s super simple to make and the Indian Spices are subtle yet flavorful. Ground coriander, the taste most people associate with Indian food, is the base flavor in this recipe. Using half the amount called for in the original chicken tikka recipe ensures that the flavor doesn’t overpower.

In authentic Indian chicken tikka recipes, the chicken is marinated in tart yogurt flavored with Indian spices. The yogurt tenderizes the chicken and acts as a flavor carrier. My version replaces the yogurt with coconut milk and lemon juice. Marinating overnight or up to 2 days produces the best flavor, so this is a make ahead recipe.

The grilled chicken wings have a wonderful smoky smell and flavor with cooked bits of cilantro and garlic stuck to the outside. Biting into the chicken reveals flavors of garlic, coriander and chile powder.

My family likes to eat these chicken tikka wings with a bright citrus sauce made of cilantro and lemon juice. It has a lot of flavor so a little goes a long way. Any leftover sauce is great as a salad dressing, over fish or grilled vegetables. 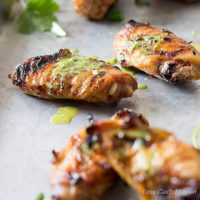