I’ve had peanut butter on my mind the past several months. I’ve been wanting to make an outrageous peanut butter pie f-o-r-e-v-e-r. I never got to it and settled for making some delicious peanut butter fat bombs instead. I’ve had a lot of nice comments on that recipe on Facebook. (Don’t forget to “Follow” and sign up for the Newsletter)

But back to my peanut butter dreams…

I dithered back and forth between a chocolate pie crust or a peanut flour pie crust. I wanted something to enhance the flavor of the pie, not subtract from it. Peanut flour won out! It’s perfect and just as easy to make as the popular low carb almond pie crust and walnut pie crust that I posted previously. This recipe uses roasted peanut flour; a small amount gives such an amazingly powerful peanut punch. I’m incredibly happy with it and I think you will be too.

I used Byrd Mill Peanut Flour Light 28% because it’s been sitting my my fridge, unopened, for over a year. It has the lowest net carb count at 3nc per ¼ cup (22 g). For those of you who are Sukrin fans like me, Sukrin USA has a peanut flour that works great in this pie crust recipe, too.

A vanilla pudding or chocolate pudding would be amazing in this crust as well as any chocolate avocado pudding you make. No-bake cheesecakes and various mousses would be equally dreamy in this delicious peanut flour pie crust.

[NOTE] A reader just asked if she could use PB2 in this recipe. I bet it would work just fine. FYI, I mixed my peanut flour with water and also made a nice peanut butter. It has absolutely no sugar, salt or preservatives in it. It may even cost less. Again, I suggest the Byrd Mill brand or the Defatted Peanut Flour from Sukrin USA. They are similar in price at the moment. 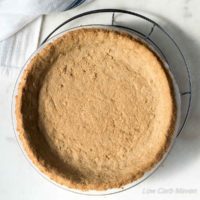