I recently visited my brother and his family in Texas. There’s a Mexican grocery near his house which he swears has the best meat in town, for the best prices. One of his favorite purchases is Mexican style pork chops or chuletas de puerco (chuletas de cerdo). The Mexican pork chops are thinly sliced bone-in pork chops that cook up in minutes. He fries them in a pan and claims they taste like bacon (I think they taste like pork chops).

Unless you’re from New Mexico, you may not be familiar with chile verde which is a stew made from roasted green peppers (specifically Hatch green chiles) and pork. It’s a bit thinner in consistency than the typical stew and often ladled over other dishes as a condiment. I love it served in a bowl and topped with an egg, ladled over chicken enchiladas or served in a tortilla as a soft taco. It’s delicious.

This Mexican pork chops recipe is a version of chile verde. Instead of stewing the pork with the green chile peppers, I cooked the pork chops in a pan and then made a quick chile verde sauce to spoon over the pork chops. I found thin-cut, bone-in pork chops at my grocery store but substitute boneless pork chops if you’d prefer. Just make sure to pound them to ½ inch thickness so they cook quickly. I suggest to butterfly them before pounding.

If you haven’t noticed, this is a low carb recipe. Yes, you can have low carb Mexican food while watching your carbs. I stick with more traditional Mexican recipes that don’t require tortillas or rice, but you can always find substitutes for your favorite things. I often use low carb tortillas for soft tacos and cauliflower rice in place of Mexican rice. This time I made a meal of chile verde pork chops, Mexican green beans and cheesy cauliflower mash. It was delicious. I’m sure you’ll love it, too.

For an interesting shrimp chile verde recipe check out this great appetizer on Beauty and the Foodie. 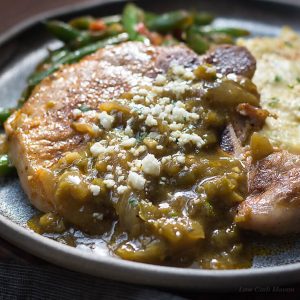