This perfectly hearty and easy Manhattan Clam Chowder recipe uses celery root instead of potatoes to keep it flavorful and low carb. Keep yourself warm this season with this fabulous gourmet soup.

My favorite time of the year has arrived, Fall. Those of us living in southern California are enjoying crisp-cool morning temperatures and warm sunny afternoons. It’s finally time to bring out the sweaters and enjoy a warming bowl of soup for lunch or dinner. Of course, I eat soup year-round. My family loves soup and I not only find it easy to make, but it’s great to have on hand for those days when you just don’t feel like cooking anything.

Since going low carb, I have had to find ways to lower the carbs of my favorites like Minestrone or cream of celery soup. Manhattan clam chowder is the newest on the low carb soup list and it’s delicious. BTW, if you are wondering about the croutons and potatoes in the photos…. they are low carb subs (Sukrin Sesame Bread Mix and celery root), that fooled even me!

There’s much controversy surrounding Manhattan clam chowder; people either love it or hate it. I personally love it. Those who don’t care for it often prefer New England style clam chowder, which is a cream soup consisting of clams, milk and potatoes.

As I previously said, I love Manhattan clam chowder because it’s nice tomatoey broth tickles my Italian heritage and it’s ease of preparation makes it perfect for weeknight dinner-time. Although I say it’s tomato based broth appeals to the 2-drops of Italian in me, I did some sleuthing and discovered that this shellfish soup was most likely developed by Portuguese immigrants who were already preparing tomato based fish stew at home. Portuguese fish stew anyone?

Traditionally made with potatoes, celery and onions, this easy version for Manhattan clam chowder uses celery root (celeriac) for both it’s celery flavor and it’s texture –  which is similar to that of potatoes. A little green bell pepper brings in a tiny sharpness similar to that found in Louisiana cuisine, in which the Portuguese have also had a hand. This is evidenced by the use of green bell peppers instead of carrots (usually found in a traditional French mirepoix of onions, carrots and celery) and the addition of tomatoes to some of the soups and stews of the region.

This easy Manhattan clam chowder recipe is low carb version allowing a hearty portion size. This chowder recipe from the New York Times was my inspiration. Be sure to select canned clams without any added sugar such as Bumble Bee Brand. I used canned clams for convenience and to bring the dish together quickly and simply. Bacon adds a nice depth of flavor, smokiness and mouth-feel and the addition of butter at the end makes it better. This is an easy soup, perfect for weeknight cooking and yields 8 hearty 1 ½ cup portions (355 ml).

[NOTE: No high carb bread or potatoes were used in the recipe. The croutons were made with Sukrin Sesame Bread Mix and the “potatoes” are celery root (celeriac).]

Each hearty portion of this delicious Manhattan Clam Chowder is 8 net carbs. 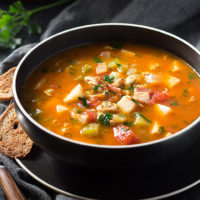