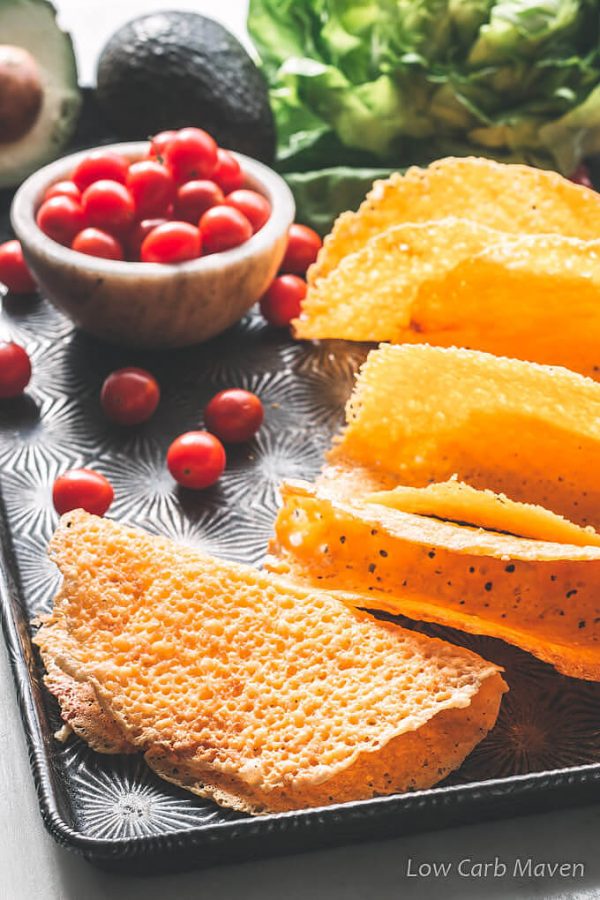 If you’ve missed eating crunchy tacos like I have, then you are in for a treat. Low carb taco shells made from cheese are the new “in” thing.

We’ve baked cheese into cheese chips for dip, taco shells, chalupa or tostada shells and bowls for salads or appetizers. They are very versatile and my family loves them. 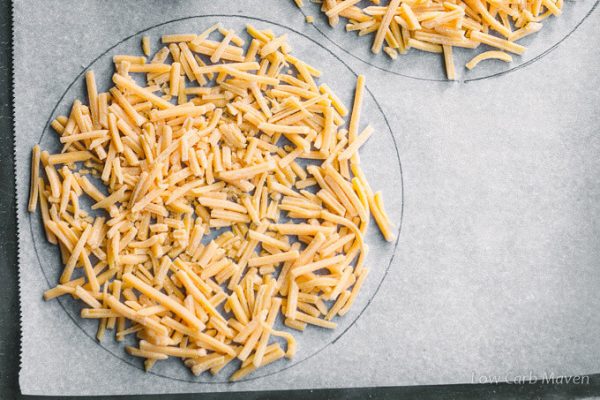 A Google search for low carb tortilla recipes yields many options for crepe-like and wrap-like tortillas. My recipe for Almost Zero Carb Wraps, which we use as breakfast wraps or fill with thick Southwestern stews, is right there on page 1.

Crunchy low carb keto taco shells recipes have been elusive… until a year or two ago, when cheese taco shells made their appearance.

Lowcarbers and Ketonians have used cheese to make chips for years now, so making them bigger to accommodate fillings is just a natural progression – and genius! I get a kick out of all of the possibilities these fun snacks provide. 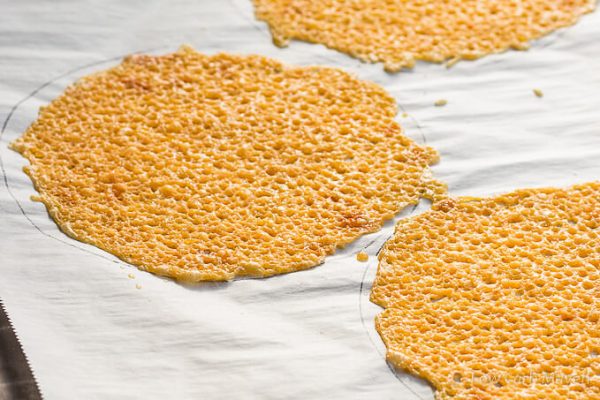 All kinds of cheeses can be used to make cheese taco shells and they all have different flavors and levels of crispness. Some yield a cheese shell that is more crisp while others are a little more tough in texture.

The shells can be made with shredded cheese or cheese slices. They can also be made in the oven, on the stove or in the microwave.

Celiacs: If you are looking for gluten-free taco shells, this may be the recipe for you. Make sure that the pre-shredded cheese you use, is free from gluten and you will be fine.

Yes, a small amount of carbs comes from the lactose in cheese. Most cheese has 1 carb per ounce. Many brands will list zero carbs because of FDA rules that say if a product is below 1 carb per serving it can be listed as zero even if it has .8 carbs. So, I generally count 1 ounce of cheese as 1 carb. The cheese taco shells are 1 carb per shell. 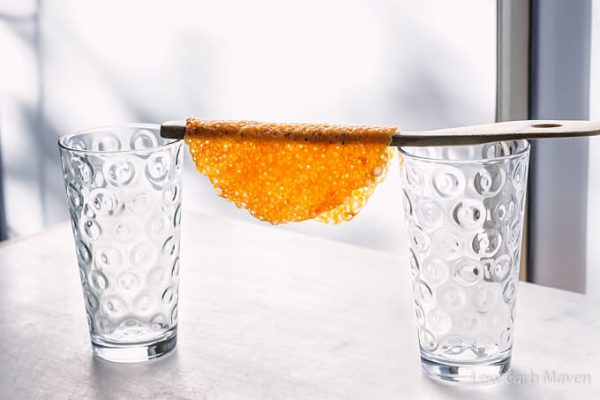 Making low carb cheese taco shells is easy. Place slices of cheese or a pile of shredded cheese on a prepared surface and cook:

Once cooked, give the cheese shells just a second to cool before removing, but work fast! They need to be shaped while still pliable. Simply drape them over a wooden spoon or dowel until the cool and are crispy.

They can also be stuffed into a muffin tin cup to make into a bowl for appetizers. For chalupa or tostada shells and chips, simply let cool on the baking pan, then cool completely on a cooling rack before storing in an air-tight container. 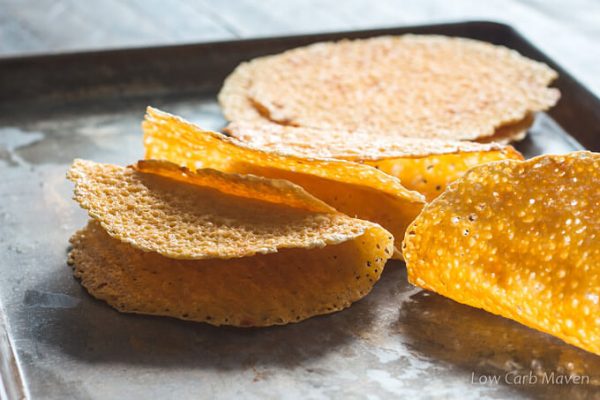 Recently, I have been using a taco shell maker for making cheese taco shells. I think it’s much easier than using wooden spoons.

I tried several kinds of cheese and found that pre-shredded cheddar cheese from the grocery worked the absolute best. Also, the sharp variety became more crispy than the mild. Monterey jack and Colby jack cheese didn’t get as crispy but also worked well. Parmesan cheese made delicious chips which we enjoyed on our salads.

Each cheese taco shell is 1 carb.

[Post and recipe contain affiliate links. Purchasing through a link may result in my earning a small consideration at no additional expense to you. These pennies help me continue to provide great free content.] 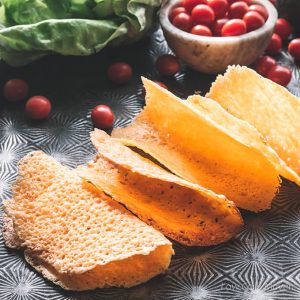 To make a single serve cheese taco shell in the microwave, spread 1/3 cup of cheddar cheese into a circle (see photos in post) and microwave for approximately 2 minutes. This will take more or less time depending on the strength of your microwave. My microwave is not very strong.
Nutrition Facts
Crispy Cheese Taco Shells (Low Carb Keto Taco Shells)
Amount Per Serving
Calories 171 Calories from Fat 126
% Daily Value*
Fat 14g22%
Sodium 264mg11%
Carbohydrates 1g0%
Protein 11g22%
* Percent Daily Values are based on a 2000 calorie diet. 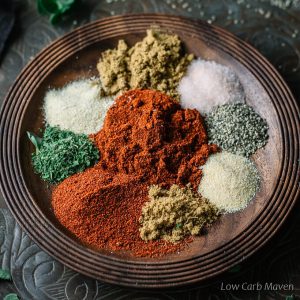 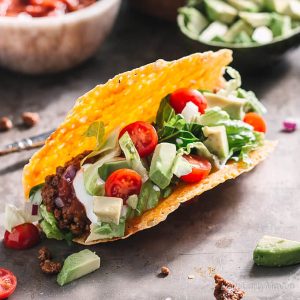