This Cinnamon Chicken recipe starts in the skillet and finishes in the oven. Coating in almond flour offers a low carb and gluten-free fried chicken option.

This Low Carb Cinnamon Chicken is so insanely delicious.

When I was in high school, my mother was into cooking “light” meals. At the time the government and doctors were pushing low fat diets to cure heart disease, lower cholesterol and to stem rising obesity rates. In particular, my mother had 4 or 5 hard backed Cooking Light cookbooks and I remember looking at the pictures and reading the recipes over and over. One of the recipes was for Cinnamon Chicken which was crumbed, cooked in the oven and then drizzled in honey. It was delicious.

I’ve long since lost the recipe and now follow a low carb ketogenic diet, so the recipe needed some updating — just as the old thinking of avoiding fat and eating more carbs is being updated, albeit slowly. I decided to coat bone-in chicken breasts with almond flour and start them in a cast iron skillet before transferring them into the oven to finish cooking. Almond flour is a great low carb coating for meats and vegetables but it can burn. I have found that laying a piece of foil over the dish will prevent it from over browing or burning in the oven.

Cinnamon Chicken makes a great Sunday dinner… I prepared it in a cast iron skillet. It’s a pretty big pan. Because the chicken breasts I had were so big I had to cook them two at a time before putting them together in the skillet for baking. The breasts were big enough to feed eight. My family of 4 enjoyed this Cinnamon Chicken two times for dinner and still had chicken left over to mix into the remaining Riced Cauliflower Pilaf to have for lunch. My kids love this recipe!

BTW, these were great with Garlicky Oil and Vinegar Green Beans on the side.

Time wise, this dish is great. It comes together really fast then cooks in the oven for about an hour, providing enough time to prepare sides, do a little dishes, spend some time with loved ones or maybe catch-up with your favorite show on Netflix.

***The nutritional value is for the cinnamon chicken coating per serving. 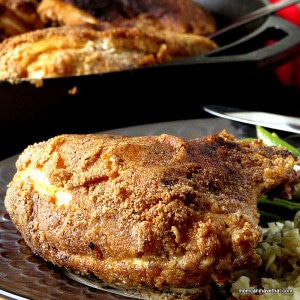