This healthy loaded cauliflower tastes like loaded potato skins without all the carbs. Made with butter, sour cream, chives, cheddar cheese and bacon, it’s the ultimate side for keto diets.

A couple of weeks ago I brought you lovely people one of my favorite recipes for mashed cauliflower with celery root and talked about how cauliflower is the unsung hero of the low carb world. We use it for almost everything, don’t we?

I know that I’ve personally roasted cauliflower with bacon and green onions as a side and have pureed it to add body to cream of celery soup. I’ve also seasoned it with exotic Indian spices in a wonderful vegetable masala and I’ve added it to hearty beef curry. One of my favorite ways to enjoy cauliflower is as cauliflower fritters that sub for hash browns. Yum!

Even mainstream bloggers have discovered cauliflower and are making great cauliflower pizzas like this one from Kevin at Closet Cooking. And Lisa from Low Carb Yum uses cauliflower in some of her desserts – chocolate pudding anyone?

You can see that cauliflower can be used for almost any dish. But you, my low carb friends, already know this. You’ve been cauliflower ninjas for years!

For me, it’s the more simple recipes that hit home – like this loaded cauliflower mash. It’s the ultimate in comfort food. If you were one who enjoyed ordering loaded potato skins at Friday’s after work or preferred a loaded baked potato with your steak, this recipe will take you back to the days. At least, it did me!

And those who loved twice-baked potatoes need not mourn an old favorite because this healthy low carb cauliflower tastes so good, I could have called it twice baked cauliflower casserole!

The trick to getting a fluffy cauliflower mash:

That’s it.  Easy, cheesy and delicious!

My kids couldn’t get enough. These are die hard mashed potato haters! This healthy loaded cauliflower was a hit in their book and a win for me! 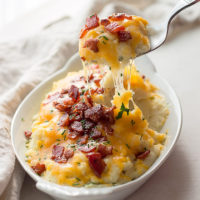 NOTE: If making ahead and refrigerating, I find it best to microwave at 50% power for a few minutes to take the chill off before placing in the oven to finish warming up and then placing under the broiler. This will freeze, but replace the sour cream with cream cheese instead.