Ham and green bean soup is a hearty and nourishing meal. By using leftover ham and green beans, this low carb and low calorie soup comes together in a snap! Most suitable for low carb maintenance or THM.

This is one of my favorite soups and I make it every time I cook a ham. It’s the perfect way to use up some of those holiday left overs. In fact, I make sure to cook extra green beans at our holiday dinners to put in this soup. Don’t have left over beans? It’s okay. You don’t need to use left overs.

My mother used to make a ham and green bean soup with flat Italian green beans — I can never find them, so I use regular green beans. This is not her recipe and I am not sure she really had one. My mother was a wonderful intuitive cook and often made things by adding a little of this and that – being guided by taste.

Ham and green bean soup is most easily made when using leftover green beans and ham, but I have made it with fresh ingredients before. It’s just as good, but it comes together super fast when using holiday leftovers. I also enjoy using the juices from the ham to help flavor the soup.

Those of you who are low carb may balk at the potatoes in the recipe. I understand. It is generally something we avoid – especially in weight-loss phase. Those of you who are keto or LCHF often don’t eat root vegetables and will avoid this recipe. As I said previously, I only make this soup once a year. It tastes like “home” and reminds me of mom.

[NOTE:] This is a popular recipe with those who follow the THM (Trim Healthy Mama) program because it is low in calories and fat. I believe it is considered a “crossover meal”.

This Hearty Ham and Green Bean Soup is 10 Net Carbs Per serving.

*Not suitable for diabetics. 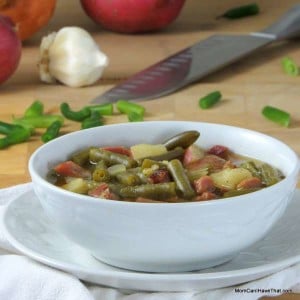 For the BEST ham flavor, use the left over broth in the pan from cooking the ham. I commonly have 3-4 cups of broth after cooking. I freeze it if I’m not going to use it right away. It is also AWESOME for cooking your green beans. I drain my green beans and freeze the ham pot liquor again.
Nutrition Facts
Hearty, Low Carb Ham And Green Bean Soup
Amount Per Serving
Calories 158 Calories from Fat 63
% Daily Value*
Fat 7g11%
Carbohydrates 12g4%
Fiber 2g8%
Protein 11g22%
* Percent Daily Values are based on a 2000 calorie diet.