Originating in France, ham quiche loraine is made with bacon and cheese. This low carb version uses ham, caramelized onions, Gouda and a unique low carb crust to create a beautiful presentation.

The other day at the store, I bought a 21 pound ham for $6.00. No, that’s not a typo – six dollars. Needless to say, it was a lot of ham for a family of four. What did I do with all of that ham? I made a hearty low carb ham and green bean soup, three beautiful low carb quiches, we enjoyed ham with our eggs in the morning with breakfast, and I made ham croquettes. There will be some nice recipes coming up in the next few weeks.

I remember when I first started a low carb lifestyle; never a breakfast eater unless it was cereal or toast, I was at a loss. Fried, poached or scrambled eggs have never been my thing, so I was thankful when my husband suggested that I make a quiche. The first few crustless quiches I made were boring, made with left over veggies from the fridge and cheddar cheese, but I soon found that I loved bacon spinach quiche and ate that almost every day for a very long time. Now, I’m branching out.

This quiche originates from the Lorraine region of France where it is typically made with bacon, onions and a custard of eggs, milk, cream and cheese. Quiche Lorraine became really popular when I was a kid and I remember it served at brunches and Ladies Luncheons. I also remember my mother making Quiche Lorraine and my father teasing that it was too unmanly for him to eat! This version is made with ham instead of bacon and has a gluten-free, grain-free almond crust flavored with thyme. I like the play between the salty ingredients of ham and cheese against the sweet caramelized onions. A little nutmeg adds a nice dimension to the custard and gives it a more sophisticated flavor.

After preparing the low carb quiche crust for the three beautiful low carb quiches I made this week, I have worked out the best procedure for putting it into the spring form pan. The crust is totally optional and the carbs will be lower if it’s left off, but it makes for an impressive brunch if kept. I want to provide the recipe and method for this thyme infused crust for when the occasion for a fancy quiche demands.

Now, this is a low carb crust, NOT a flaky wheat pastry crust. It will be different, but it still is delicious. The recipe looks long but this is not a difficult dish to prepare — it just has several steps. Break it up if you like. I would suggest caramelizing the vegetables and making the crust the day before, then assembling the next day. 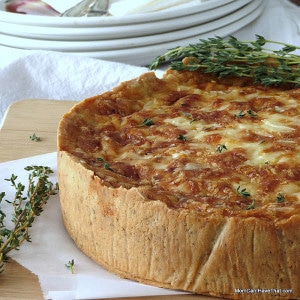