This beautiful low carb ham and arugula quiche is bursting with flavor and is suitable for a breakfast, a brunch or dinner. A nicely seasoned low carb, gluten & grain-free crust makes it extra special.

Here is another great low carb quiche to help use up left over ham. It can be made crustless for an every day breakfast quiche or with a crust for a more substantial meal. The crust gives it just the right look for a nice brunch and amps-up the flavor to spectacular.

This is the best tasting low carb quiche I have on the blog so far, excluding the and we’ve enjoyed it several times. The secret to the extra flavor is my Garlic & Herb Seasoning. I have used it in almost everything – from crackers, soup, chicken wings, Italian dishes, salad dressing…

As long as we are talking about flavor, can we talk about the cheese for a minute? This low carb ham & arugula quiche has creamy Havarti cheese AND smoked Gouda. I like the combination because the Havarti cheese is a softer cheese and adds creaminess and the smoked Gouda adds a nice layer of flavor. Besides, who doesn’t like Gouda cheese?

I’ve included the carb counts for those times one might want to make this a low carb crustless quiche. Crustless quiches are my favorite and this Ham & Arugula quiche tastes just as good crustless as it does with the crust. I’ve made quite a few test quiches and I have to report that they have all frozen beautifully. Remember, this is not a flaky pastry crust, it is a low carb quiche crust and it will be different – not bad, just different.

Are you looking for another ham quiche? Try the Ham Quiche Lorraine with Caramelized Onions. 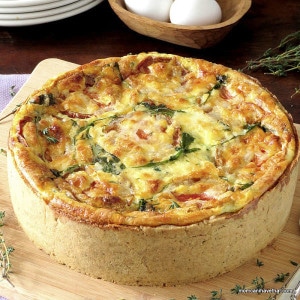