Using a prepared seasoning blend and employing a few tricks, ensures that this Garlic Herb Grilled Chicken cooks perfectly every time. Cook-up some extra for your weekday salads.

In order to keep our eating on track, I spend a little extra time in the kitchen on the weekends cooking things we will want to enjoy during the week. One thing I always focus on preparing is a protein that we can put on our lunch salads. Sometimes, it’s a tri-tip that I slice very thinly, other times it’s sausages, taco meat or turkey patties, but most often it’s grilled chicken.

We usually buy the big bags of frozen boneless-skinless chicken breasts from Costco, but lately, I’ve been buying the family packs of bone-in chicken breast halves at the grocery store. There are typically 5 breast halves in each package and by doing the work myself, I save money.

From 1 family pack I typically get 10 tenders, 5 trimmed boneless-skinless breasts, and bones for homemade bone broth. I meant to include a tutorial on how I do this, remove the meat from the bones, but the pictures were terrible, so, I will link to it at another time.

Some, may be wondering why I would include a post on grilling chicken breast. Chicken on the grill is often the first thing one learns to grill. It’s a basic skill. But, if you have a problem with your chicken sticking to the grill or if it comes off the grill with a dry exterior or a raw center, then I have included a tip or two to help counter some of those problems.

My Tips For Perfect Garlic Herb Grilled Chicken Every Time 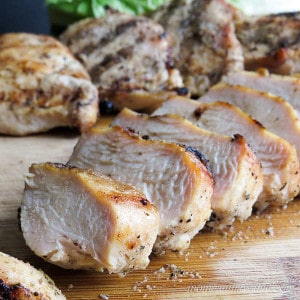