Whipped coconut cream, vanilla-vodka zabaglione, and meringue enfolding a tart ribbon of blueberry puree. This Coconut Cream Semifreddo with Blueberries is what all ice cream wishes it could be — sophisticated, creamy, with a delicate texture. Of course, it’s low carb and dairy-free, too.

My parents are visiting next week and guess what I have in the freezer waiting for them? Guess? Yes, it’s this beautiful and delicious semifreddo. I’m so excited! I also have a container of Strawberry Buttermilk Ice Cream and Lemon Buttermilk Popsicles. It’s supposed to be hot and I want to be prepared. Also, my father LOVES ice cream (and cookies). And, just in case we don’t have enough dessert, I have a French Silk Pie on-ice, too. I think we should be set!

Traditional semifreddo is a wonderful, frozen Italian treat perfect for those who do not have an ice cream maker. It’s a fancy dessert usually frozen in a deep dish, then un-moulded and sliced when ready to serve. A preparation of a traditional semifreddo consists of three parts: a whipped cream, a zabaglione (or sabayon in French) and a meringue which are folded together to create a light and beautiful textured confection. The word simifreddo means partially frozen, which describes this dessert perfectly.

I can guess that some of you are thinking this dessert sounds complicated.

I can guess that some of you are thinking it’s a lot of steps.

I’m here to assure you that it’s not complicated and that after making a semifreddo twice, you’ll want to make it for your all of your fancy guests!

I wrote a lot of instructions.

Each step takes less than 10 minutes.

BUT, in the spirit of simplifying and saving time, I tested this recipe 5 times, preparing it 3 different ways, to find the best balance between flavor, texture and ease.  I found that the traditional method was the best, hands down!

And, it’s not hard to do. A hand mixer makes it easier, but a simple whisk and elbow grease will do the trick. Here’s what one can expect: (I have linked to two helpful videos below.)

The Semifreddo starts with whipped coconut cream. If you haven’t made it before, watch this video (starring my husband’s hands) on my post How To Make Whipped Coconut Cream. It is very easy.

Here is a video of a semifreddo being made step-by-step, from beginning to end.

Again, don’t freak-out when you see the recipe. I try to be very thorough in the instructions.

This sumptious Coconut Cream Semifreddo with Blueberries is 5 net carbs per serving! 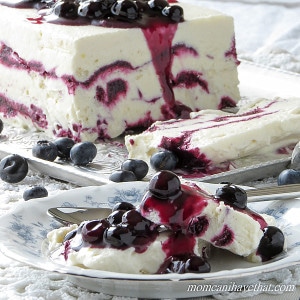