Fat Bomb Recipes and What is a Fat Bomb?

Fat bomb recipes are easy to make and can be sweet or savory. Any high fat and low carbohydrate food can be a fat bomb: avocados, heavy cream, cheeses, avocados, mayonnaise, nut/seed butters – even bacon. Any combination of these ingredients results in a fat bomb. The most popular fat bombs are sweet treats made with coconut oil or coconut butter mixed with sugar-free chocolate or nut butters like peanut butter. When “fat adapted” (burning fat as fuel), fat bombs can provide additional energy.

Not everyone likes the taste of coconut. For that reason I made these peanut butter chocolate fat bombs with butter – Kerry Gold butter which is grass-fed and full of omega 3’s. I used salted butter but you can use unsalted if you want. Reese’s Peanut Butter Cups are both cloyingly sweet and salty so I used salted butter.

Why would anyone eat something that is made almost entirely of fat? Well, many people who follow a low carb and keto life style like to keep their daily fat intake upwards of 60-80% of their daily caloric intake. I won’t get into the science behind it, but by keeping carbs very low, their bodies run on fat instead of carbs. One can find information about low carb and ketogenic diets in my Low Carb Diet Beginners Guide.

I made this peanut butter chocolate fat bomb recipe in layers. It is just as good all mixed together as a “fudge”. Because this recipe is so rich, we opt for cutting the fat bombs into 32 squares. Enjoy!

Do you prefer sweet or savory fat bombs? 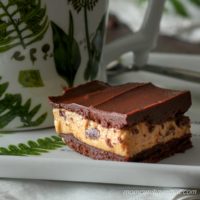