Chicken Sausage and Kale Soup paleo in the Summer? You bet! This Paleo soup is full of Summer vegetables, incredibly easy to prepare, gluten-free & low carb to boot!

For those who are unfamiliar with the term, CSA or Community Supported Agriculture is an idea which began in Japan as a way to stem the loss of farmland to development and farmers to jobs in the cities. In the 1960’s a group of women came up with the idea to financially support their local farmers in return for a portion of the harvest. The idea/practice spread throughout Europe and “took root” in the U.S. in the 1980’s.

Today, Community Supported Agriculture is a popular way for farmers to ensure support and demand for their crops and for consumers to get fresh, often organic local produce at or below grocery store prices. CSA’s provide, fresh seasonal fruits and vegetables as well as herbs and fresh flowers.

The CSA we belong to here in Southern California, Harvest2U, offers several levels of membership as well as home delivery. We subscribe to the bi-weekly family of 4 box, but there is also a couples box as well as a package for those who juice.

CSA boxes are famous for not only surprising members with the quantity of vegetables but also the variety. Every time I open a box, I’m reminded how few vegetables we really eat as a family and how sparse that variety is. It’s not uncommon to receive vegetables that we never or seldom ate as kids. Truthfully, I find it exciting to find recipes which enable us to consume all of the vegetables in a timely manner.

This soup was one of those recipes; born out of the necessity to use the kale and other Summer vegetables in our CSA box.

Many people don’t think of making soups in the Summer because soups are hot and the weather is hot, but they have no problem ordering soup at a restaurant. To me, putting a simple soup together is as easy as throwing together a nice salad. A chicken sausage and kale soup paleo satisfied the need to use some of the vegetables in our fridge and the need for a fast simple meal.

I used the sausages I had in the fridge and the veggies I had on hand, but Italian sausage would be equally tasty in this recipe as well as a variety of other vegetables. One could use all zucchini or squash, or sweet potato instead of the carrot or swiss chard instead of the kale.  Adding a little wine, homemade bone broth and seasoning made it taste complete. 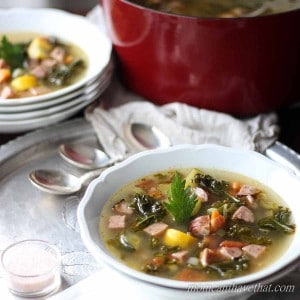