Do you love enchiladas like I do? Try this fun twist on a Mexican comfort food classic. This low carb enchiladas recipe combines sweet and tangy BBQ sauce with traditional enchilada sauce, seasoned shredded chicken and gooey cheese! Eat as is or top with keto coleslaw, sliced avocados, sour cream or guacamole. It’s an absolute family favorite.

For this recipe, I use sugar-free BBQ sauce and my homemade low carb enchilada sauce. The enchilada sauce is easy to make and has a great authentic flavor. If you want to cheat and use enchilada sauce from a can, make sure to count the carbs. Use your favorite premade BBQ sauce, (mine is Kinders Zero Sugar BBQ Sauce) or use homemade keto BBQ sauce. Alternately, mix leftover BBQ chicken (or pulled pork!) and pour enchilada sauce over the top.

BBQ chicken enchiladas call for shredded chicken. Use rotisserie chicken or make your own shredded chicken. For cooking options, read my post about “how to make shredded chicken” which includes instructions for 6 cooking methods. I always season my chicken until it tastes good before adding any sauce. This is an important step to ensure the meal is properly seasoned.

Adding green onions to the chicken filling makes it extra flavorful, but the flavor of cilantro is lost. Save the cilantro for sprinkling on top before baking and as a final garnish. If you have the “cilantro tastes like soap” gene, skip the cilantro and use the green tops from the onions instead.

I just want to mention that you can lower carbs even further by using unconventional enchilada wraps. Consider using several pieces of deli chicken or ham in place of tortillas or even steamed cabbage leaves. For that matter, you may be able to use raw kale or Swiss chard leaves as wraps. I’ve made egg white wraps and scrambled egg wraps for enchiladas before and while the weren’t as good as low carb tortillas, they did the trick. 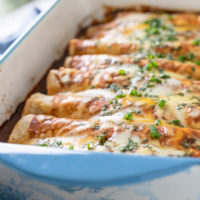 *If you aren't using canned enchilada sauce, make the homemade enchilada sauce 30 minutes before starting the enchiladas. Can make it up to several days ahead and refrigerate until needed.

Serving size is 1 enchilada. EACH ENCHILADA HAS 9 g NET CARBS. See notes for how the nutritional information was calculated.