If you’re a regular on LCM you know I use my skillet for most of my savory dishes. Why? Because it gives a good sear/color to meat, and leaves a nice brown fond (caramelized meat juices) on the bottom of the pan. This makes for building the BEST pan sauces with little to no-effort. And, a good pan sauce elevates a good meal to GREAT in less than 10 minutes!

Before I get to this tasty and oh-so-easy recipe for bacon wrapped pork chops, let me first tempt you with some other recipes that are cooked in a skillet and served with a lick-your-plate-clean sauce. Make sure to check out the recipes for Chicken Poblano and Salmon with Bacon Tomato Vodka Cream Sauce. They. Are. So. Good!

That’s a pretty fancy name for such a simple dish. Many of my entrees feature cream. This one doesn’t and can be made Paleo or dairy-free just by subbing olive oil for the butter at the end. The star of the recipe is plain old apple cider vinegar – I like Braggs, but use what you have.

Vinegar makes a terrific pan sauce.  Reducing the vinegar concentrates and mellows the flavor producing a little acidic bite with a touch of sweetness. You can increase the sweetness in the sauce by using maple bacon or adding a little sweetener. I did. But it doesn’t need much, so taste and adjust the final seasoning at the end.

WARNING: Make sure not to stand right over the pan while the sauce reduces, because the steam is quite pungent. You don’t want to burn your nose!

I love cooking and eating pork and often buy a large pork roast from Costco to portion into chops, stew meat and shish kebab meat. I have an older post that talks about how to cut up a whole pork loin. It’s useful information.

For this recipe, I used boneless pork loin chops that I purchased from the store, about 1-inch thick each. I cut off the extra fat, wrapped them in bacon (not thick cut) and cooked them up. They were ready in 10-12 minutes. (They took a little longer because I spent time searing the bacon around the pork chops.)

Three thick boneless pork chops were the perfect amount for my family of 4, when served with 2 sides. For 4 adults you might want 4 pork chops. If you are low carb and following a keto diet, you will want to watch your portion size since pork is a rich source of protein. The usual serving is 3 ounces of cooked meat for women and 4 ounces for men, but this may vary depending on age, activity level and individual macros (if you track them).

TIP: You don’t have to use pork in this recipe. In fact, you can sub a boneless skinless chicken breast for almost any boneless pork chop recipe. I even sub chicken for some fish recipes. Of course cooking times will vary depending on what you are subbing for, but it works great! 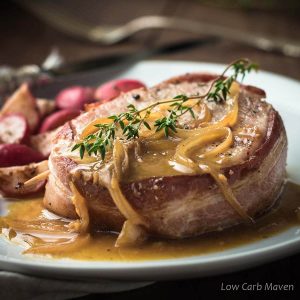 *Let the pork chops come to temperature for 20 minutes before cooking. Putting cold meat in a hot pan will shock the meat making it tough and dry on the outside and raw in the center.
Nutrition Facts
Bacon Wrapped Pork Chops With Apple Cider Vinegar Glaze
Amount Per Serving
Calories 358 Calories from Fat 216
% Daily Value*
Fat 24g37%
Carbohydrates 1.5g1%
Protein 32.5g65%
* Percent Daily Values are based on a 2000 calorie diet.